Poverty data offer an important way to evaluate New Jersey’s economic well being. In addition to the burden on individuals, high poverty rates impose costs on the state welfare system and slow the economic growth of the community and state as a whole. Poverty often occurs along with poor health, decreased economic opportunity, higher crime rates and other factors that reduce quality of life and inhibit economic growth.

As Figure 4.1 shows, the percent of New Jersey residents living under the poverty line increased in the early 1990s to a high of 10.6 percent in 1994, and then decreased through the rest of the decade to 8 percent in 2000. New Jersey poverty rates roughly paralleled national ones, though they were not as high.

There is considerable racial and ethnic imbalance in poverty levels. As figure 4.2 shows, Blacks and Hispanics account for a disproportionate share of people living below the poverty line, though the gap has decreased somewhat since the mid-1990s. The racial and ethnic inequity compounds the threat to sustainability posed by the state’s poverty level, and must be specifically addressed in any program targeting poverty in New Jersey. 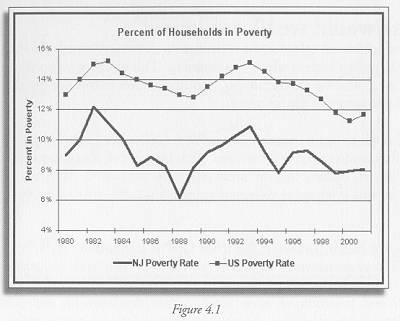 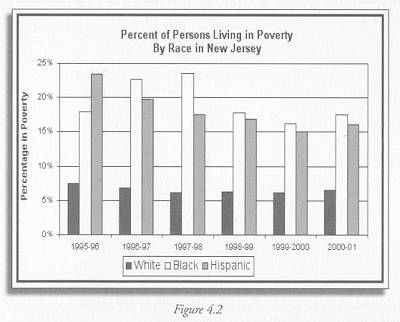