The student-teacher ratio is used to assess the potential for such interaction. It does not directly measure class size, as it is calculated based on the total number of full-time equivalent teachers, including those who teach special classes such as music or gym, and those who teach in much smaller special education classes. Nevertheless, this ratio is a reasonable proxy for average class size and student-teacher interaction.

Since 1999, this pattern has been strengthened by a Federal initiative to reduce class size in the public schools, enacted under Title VI of the Elementary and Secondary Education Act.(2) This program provided funds to the states to enable local school jurisdictions to hire additional teachers, with the goal of reducing class sizes in the early elementary school grades to no more than 18. The program also places a strong emphasis on teacher training, since teachers moved from large to smaller classes may be able to apply new teaching techniques. In fiscal year 2001, the funding for this initiative was $1,623 million, of which New Jersey received $37 million or 2.28%.(3) This program has since been subsumed within the No Child Left Behind Act of 2001.

These figures give us averages for the state as a whole, but do not show us the variation among schools or towns. It would be useful to see how studentteacher ratios vary across jurisdictions, and to link that to income, racial composition, and school performance, to understand better how we can improve education in the state. 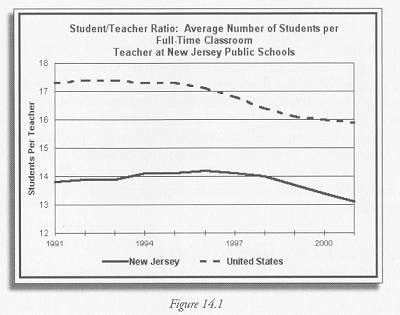