This indicator shows how many survey respondents living in New Jersey knew which party was in control of the State Legislature. It is a proxy for assessing the health and vitality of our democracy. Our elected legislators make decisions for us about public policy issues that affect all of us. In a sustainable society, people take responsibility for ensuring that their elected officials are indeed serving their interests. If we do not even know which party is in charge, it is difficult for us to hold government responsible for its decisions or to have a basis for our voting decisions.

As Figure 17.1 shows, knowledge of government has been dropping since the mid-1970s. In the most recent survey, 2003, it was only 20 percent. The particularly low figure in 2003 is partly due to the change in how the question was asked. Because the State Senate is equally divided between Republicans and Democrats, the questions about both the Assembly and the Senate gave three choices – Republican control, Democratic control, or equally divided – rather than only two as in the past. This may have confused respondents who knew that one house was equally divided but did not know which one.(1)

The ability to identify at least one U.S. senator from New Jersey has also dropped. Almost two-thirds of New Jersey residents could not name one U.S. senator in 1998, according to the Eagleton Institute poll through which these data are collected. Again, this is the lowest value recorded in this survey over thirty years. This question was not asked in 2001, so we do not know how this value has evolved.

The decreasing knowledge of government may mean that we are losing ground for civic participation and effective political process. When people are disengaged from the political process, it can decrease our capacity to detect and solve public problems through governmental action..

The ability to name the governing party or senators only represents a small part of civic engagement. Many other measures might also capture sense of ownership of community decisions or participation in society. Creating these measures, however, is difficult; it is a task for future editions of this document. 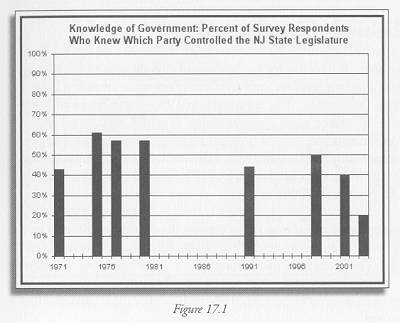 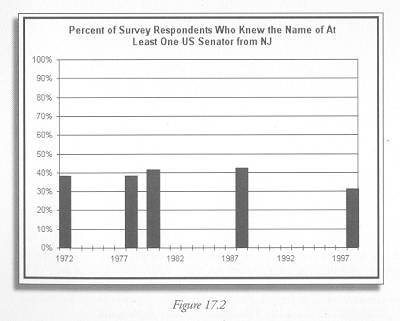